(A C Grayling is a philosopher, writer and broadcaster. The dyptich can be viewed either way, and so forms a palindrome)

Anthony Grayling is not the only character present. Others are there in varying guises – image as well as word – each visually juggled and flowing the way the living mind may run, endlessly to and from its sources. All the texts, despite first appearance, are carefully given and the painting contains references to the following:

One way or another Beethoven, Schubert, Vermeer and Claude all make an appearance too, and so do many places: Athens; Florence; Rome; Venice; Delft; Oxford; London; Africa; the Far East …even “the whole azure vault”

Yet all of this is set, I hope, beside more prosaic but no less important things of life: builder’s tea and fruit; companionship and conversation. 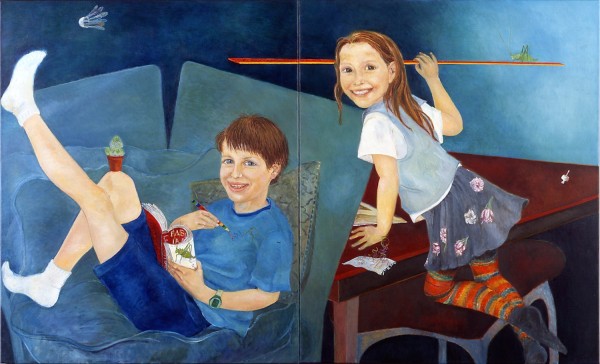 (A portrait of two children, conceived to be seen as two separate paintings or as one double portrait)

Eleanor and Rebecca are the daughters of an ecologist and a paintings conservator. Besides the obvious allusions to the fable of La Fontaine, the painting contains references to both the childrens’ interests and those of their parents. The commission contained the particular request that the painting should be a dyptich, viable as two separate portraits and yet, to be conceived as one.