The paintings that interest me most are those that communicate in an intimate way. A good painting, figurative or not, has a resonance which illuminates the ambiguity and complexity — the mixture of feelings — which are the texture of our living experience. I am a painter overwhelmingly interested in visual narrative and in people – especially their emotional hinterlands.

I began as a painter of still life but through the eighties painted many performers and actors — in effect, people pretending to be other people. The relationship between theatre and painting is an abiding preoccupation and I often feel that my task is to paint portraits of the stories held within quotidian objects, persons and in transient nature.

Since 1990, much of my work has focused on the subject of childhood — the interior experiences of it and of its memory. None of these Childhood Fragments contained portraits although they carry the ghost of myself and/or other persons/children, rather in the way the novelist might create a character psychologically real from the shards of their life. I have tried to paint, albeit through the filter of memory, the commonplace bits and pieces of childhood life. My feeling is that children everywhere, no matter in what situation or circumstance, experience with vivid emotional force. Small things may have overwhelming importance then. It is inside this microcosm we grow and fight our way until adulthood cloaks our memory of it and requires of us the use of perspective.

Off and on over nearly ten years (1996 – 2006), I worked on an ambitious painting cycle entitled ‘The Inhabited Space’, a meditation on Velázquez’s ‘Las Meninas’ and a picturing of the mind’s creative world. Completed at the Albers Foundation in Connecticut during a residency, it was exhibited at the Yale Center for British Art in the spring of 2007.

Punch and Judy theatre is another starting point, in which the anarchic puppet metaphor is used as a means for making images about domestic life. These paintings, drawings, prints, puppets and an artist book muse on the private lives of the two puppets as seen inside the tent, their ordinary adult activities frequently observed by children.

Recently, I am returned to the genre of still life, making series of small paintings (Festoni) chronicling the beautiful transience of flowers and fruit, especially as witnessed and gathered in Northern Italy.

Almost all my paintings contain allusions to literary texts as well to other paintings. The ‘Childhood Fragment: Icarus Boy’, for example, quotes from Breughel and from Auden, relies on Russian icon painting for its configuration, Indian miniature painting and memory for its sense of place and transmutes the pleasure in childhood balancing to the idea of (nearly) flying. All of which, I hope, combine to provide a painted allegory for trying, or the act of painting itself. 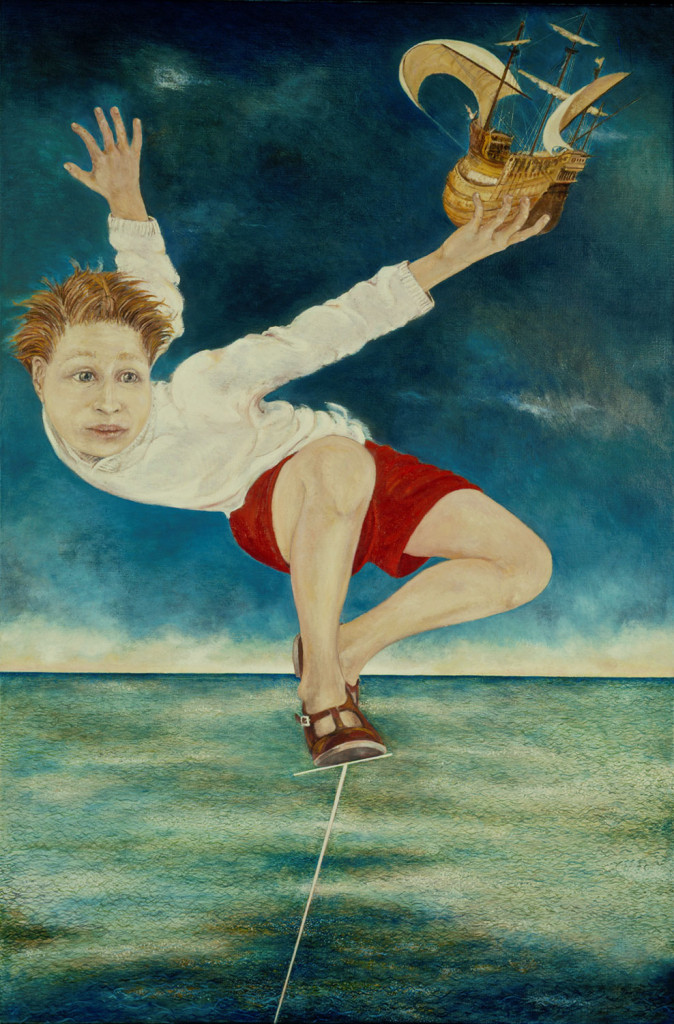